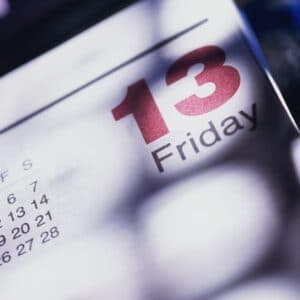 On Friday the 13th some people find themselves worrying. They avoid flying, crossing paths with a black cat, and never walk under an open ladder. Some may decide not to ride elevators. Others remain at home altogether! Friday the 13th of May might find you tripping on a banana peel or stepping in a mud puddle.

In our current scary world, we’re getting used to pandemic-related horrors.  It doesn’t seem to matter what day it is, because COVID has returned, and we must be vigilant to keep it at bay. But every day seems like a bad day when we give in to our fears.

Americans are so spooked by the number 13 that some buildings even skip the 13th floor. But if we lived in Israel today, we might be expecting only good things. That’s because in Israel, and in Judaism in general, 13 is considered a lucky number. What is the age of a bar or bat mitzvah? 13. How many months are there in the Hebrew lunar calendar? 13.  There are 613 commandments. And don’t forget The 13 attributes of G-d laid out in Exodus to explain why He forgave us for that whole golden calf episode.

Still unconvinced? Consider that Maimonides aka the Rambam, formulated 13 principles of faith. When Israel was established in 1948, the first provisional government had 13 members…. Why? The Israelis say, “For good luck!”

People all over the world allow principles of magical thinking to control them. There were 13 people present at the Last Supper, so they fear anything connected to the number 13 is bad luck.  Gary Waite, a professor of early modern history at the University of New Brunswick, says there’s nothing to be afraid of. “If people believe that something has negative value, if people believe they’re going to experience bad luck on Friday the 13th, it’s more likely to happen to them,” Waite said. “It’s a self-fulfilling prophecy.”

Thomas Fernsler, a retired professor in Delaware, also known as Dr. 13, became fascinated with Friday the 13th about 30 years ago while observing a calendar with three Friday the 13ths. As an associate policy scientist in the Mathematics and Science Education Resource Center at the University of Delaware in Newark, Fernsler said that the number 13 suffers because of its position after 12. He says that “numerologists consider the number 12 a “complete” number. (12 hours in a day, 12 months in the year, 12 signs of the zodiac, 12 days of Christmas, 12 tribes of Israel.) 13’s association with bad luck has to do with just being a little beyond completeness. The number becomes restless or squirmy.”

“Friday the 13th has a negative connotation for some because Christ was crucified on that day; and that was the day that Eve tempted Adam with the forbidden fruit… and Abel was slain by his brother Cain on Friday the 13th.”

For Jews, this week, Friday the 13th is the beginning of Shabbos and is meant to be celebrated and kept with family and friends. This is a special day we are given every week.  Make a Challah, buy some flowers, light the candles, chant the prayers, and celebrate your beliefs with gratitude. Take good care of yourselves, stay strong and give yourself this day of rest.

Wishing you a peaceful Shabbos in good health with good luck in everything you do.

Bubbies and Zaidies
Comments are closed.