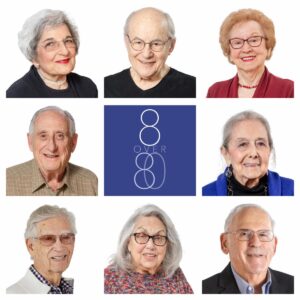 When I was five

you taught me how to separate an egg.

I watched you tap it on the rim

press your thumbs to the spot

and crack it clean in two.

You let me take the speckled shell

in my own hands

and rock the yolk back and forth,

as it slid from one half to the other,

We put the splintered pieces

in the brown bin

and the empty carton

in the red bin

The light went out of the gold elm.

We stood at the window.

The moon was a white cup.

The birds had gone to their nests, you said

and tomorrow would be a good day.

I spread my fingers on the dark glass.

Our cake, you said, would rise.

I know the grandchildren of our 2022 Eight Over Eighty honorees are loved deeply by their grandparents, who have shared their inspiring life stories for our Sunday event. The turning points in their lives significantly altered their paths, and each of our honorees has in turn made an impact on those following them, including their grandchildren.

Our honorees smile proudly when speaking of their loved ones, their families, and in particular their beloved grandchildren. All roads lead to the next generation who create good lives in honor of the grandparents who inspired them. May we continue to grow and follow righteous paths in honor of these eight great individuals.

Shirley Benyas’ son, Eddie, once auditioned for the orchestra in a community theater for a performance of Fiddler on the Roof.  Eddie encouraged Shirley to audition for a role, and she got the part. She went on to join SAG, star in 5 feature films, perform with the Michigan Opera Theatre at the Fisher; and perform in many plays at the Attic Theatre and Jeff Daniels Purple Rose Theatre. Shirley continues to stay active and teaches classes at Meer Apartments. Her Reader’s Theatre and Yiddish classes are very popular with the residents. Shirley’s two sons, Eddie and Mark and their wives have made Shirley a very happy Bubbie. Shirley refers to her grandchildren as “delicious.”

Charles Danto was 17 when he went into his family furniture business in Southwest Detroit, a struggling community of immigrants. Charles recalls: “Our community had Hungarians, Polish, Arabic people from Lebanon. Today the Latina community lives and works here. We have always supported the neighboring communities. We gave one boy some mattresses and he was able to bring over his family. In their honor he worked hard, attended school, and eventually became a lawyer. I understand the plight of immigrants, having come from a long line of Jews from Spain and Portugal.” My children and grandchildren are spread around the country, and we are all very close. My granddaughter Ashley works in the business with us.”

Dr. Joe Jacobson loves being Jewish and his humble beginnings as a hard-working Yeshiva Beth Yehuda student led him to make a significant impact on the Detroit community and in Israel. His service on many Jewish volunteer boards, including his Chairmanship of the International Board of Weizmann Institute of Science, was an important way for him to give back. Serving his patients as a respected orthodontist, he is a Diplomat of the College of American Board of Orthodontists, and he helped create an Orthodontics Department at the University of Detroit and additionally opened a dental clinic in Ramla, Israel. His greatest pleasures are his 7 beautiful grandchildren.

After Sophie Tajch Klisman survived 5 years of horrific experiences in 3 concentration camps, she made her way to America by boat, still a teen, eventually arriving in Detroit, where she applied for a job in a laundromat. She made time afterwork to attend night school where she met her future husband, Bernard. They fell in love, got married, had 2 children and were able to purchase a home in Detroit. She made it her mission to speak and educate others about her experiences during the Holocaust, and as a result, she has enlightened many hundreds of people about the horrors of hatred and antisemitism. Her loving children and grandchildren make her life complete.

Social justice advocate and artist, Rene Lichtman, was a hidden child during the Holocaust. He has traveled the world uncovering thousands of stories of hidden children and educating others about them. He leads the group– Hidden Child/Child Survivors and he is co-founder of the World Federation of Jewish Child Survivors of the Holocaust. He has made it his life’s mission to educate people about the Nazi’s most vulnerable victims. Rene has 3 children and is so pleased to be a grandfather.

Sculptor, Jerry Soble began a work career training as a pharmacist, at the Detroit Institute of Technology, honing his skills in his father’s drugstore and then opening four of his own, all while pursuing his interest in sculpting. His wife, Marilyn, also an artist, encouraged him to focus full time on art, and eventually he left behind his business to practice his craft. Jerry and his wife and muse, partnered in creating world class sculptures for 40 years, which he describes as “the happiest years in my life.” In memory of his father, Jerry went on to become the President of Congregation B’nai David, focusing on fundraising there and supporting cultural arts at the JCC, Israel Bonds, JARC, and Friendship Circle. He is beloved Poppi to his grandchildren.

Rae Sharfman learned about the plight of the Jews during World War II by listening to the radio that was always on in her childhood home in Windsor, Onario. This propelled her to become an activist, helping Jewish citizens leave the Soviet Union and move to Israel. She joined a group called The Union of Councils for Soviet Jewry and advocated also for the Children of Chernobyl.  A grassroots advocate, Rae is an avid Zionist and member of Regavim, Women In Green, and the ZOA. Rae has traveled to Israel many times, living there for five years, and has made many friends.  She also served as a volunteer in an Israeli army medical unit. Her son and daughter live in Michigan, and each has three children and grandchildren, who are her greatest joys.

Sylvia Starkman, an accomplished professional musician, was warned by her male college professor at the University of Michigan that a female woodwind player could never get a job playing in the symphony orchestra. She dedicated herself to proving him wrong. Sylvia was invited to join the faculty of Stephens College in Missouri and played first chair in their orchestra for 10 years before moving back to Michigan. At Adat Shalom, Sylvia went on to co-found the Tuesday Night Study Group in 1985, and she is still learning with this group and coordinating the speakers 35 years later. Her beloved grandchildren reside in Toronto.

Join us online, this Sunday, May 22 at 11:45am for Jewish Senior Life’s 29th Annual Eight Over Eighty Tikkun Olam Awards Celebration.